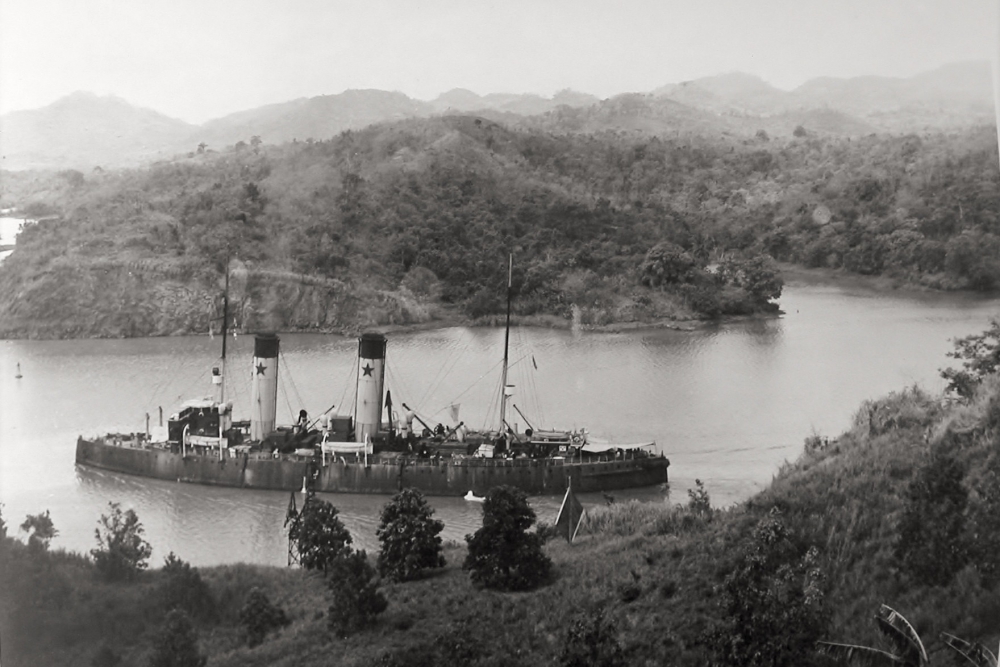 Soviet Icebreaker Krassin pictured in the Panama Canal in April 1934,she was built for the Imperial Russian Navy as Svyatogor. She had a long, distinguished career in rescue operations, as well as a pathfinder and explorer of the Northern Sea Route. She has been fully restored to operating condition and is now a museum ship in Saint Petersburg.

She was built by Armstrong Whitworth in Newcastle upon Tyne, she was launched as the Svyatogor on August 3rd 1916 and completed in February 1917.Up to the beginning of the 1950s she remained the most powerful icebreaker in the world. During the allied intervention against the Bolsheviks in Northern Russia (1918–19) she was scuttled by the Royal Navy. They raised her for use in the White Sea and later brought her from Devonport to Scapa Flow for crushing Anti-Submarine hurdles put up to prevent German Submarines entering. During this time she also undertook Minesweeping duties. Svyatogor, she was returned to the USSR under the Krassin trade agreement in 1921.In 1927:she was renamed by the Soviet government to honour a recently deceased early Bolshevik leader and Soviet diplomat Leonid Krassin. During World War II, Krassin participated in many Russian convoys. In 1941 the US Government entered into negotiations with the Soviet Government for the purchase or lease of one or more of their modern Ice Breakers for use by the US Coast Guard on the east coast of Greenland. The Krassin was offered, and crossed the Pacific to Bremerton, Washington. She was surveyed and found to be in need of repairs totalling about $500,000. Funds were allocated from President Franklin D. Roosevelt's 'Emergency Fund for the President', but negotiations came to an abrupt end on November 25th 1941. Although the Krassin never served in the Coast Guard, the Service gained valuable knowledge about icebreakers that was put to use in the design of the Wind Class Icebreakers

She continued her journey through the Panama Canal to Great Britain, where she was armed with surface and anti-aircraft guns and proceeded to Reykjavik, Iceland to join convoy PQ-15. She escorted the convoy through the North and Barents Seas, around the Kola Peninsula and into Murmansk. After the war, the historic Icebreaker took an active part in research expeditions in the Polar Ocean and led Soviet cargo convoys through the polar region. Rather than being destroyed (like the Icebreaker Yermak) to make way for more modern ships, the Krassin was preserved and restored. The vessel is now a museum ship in Saint Petersburg, the only icebreaker maritime museum commemorating the Arctic convoys. She has been fully restored to operating condition and there are plans to sail her to various European ports.