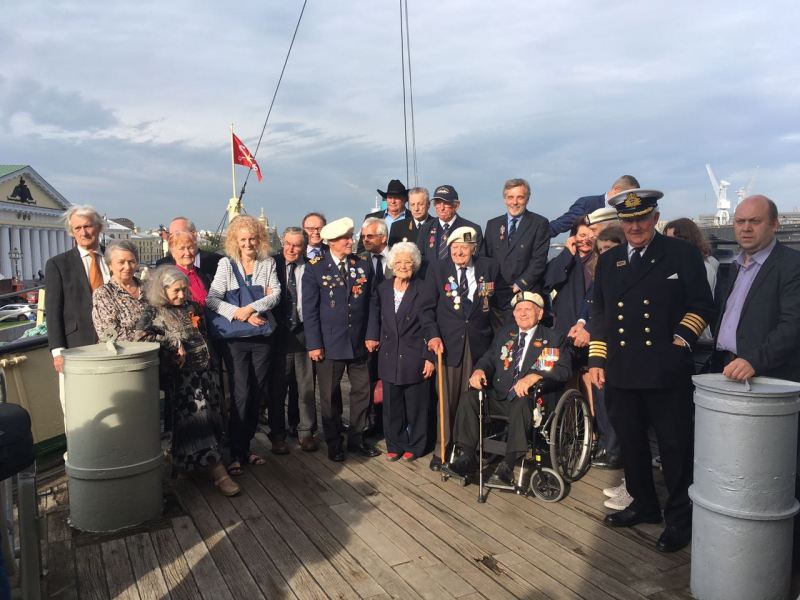 After last year’s successful DERVISH 75 Celebrations and Commemorations in Arkhangelsk and St Petersburg this year the Polar Convoy Club of St Petersburg convened a Conference in their city to address ways in which Arctic Convoy memories can be kept alive once the steadily dwindling band of Veterans from Russia, the UK, the USA and other Allied Countries have all ‘crossed the bar’.

I led a lively group of 17 from the UK and we were joined by 4 sons of Convoy Veterans from the States. My group consisted of 5 Veterans (David Craig, Harry Grew, Baden Hall, Captain Rolfe Monteith RCN and Seymour Taylor) with 1 wife, 1 daughter, 1 son and 1 son-in-law as Carers; Baden Hall’s daughter and son-in-law and their daughters Hannah (14) and Emily (11); James Weeden (son of a Convoy Veteran) and George Milne, Chair of the Russian Arctic Convoy Project, Loch Ewe.

The venue for the first full day of the Conference was the handsome lecture hall in the Russian Geographic Society. In his opening remarks Captain Yuriy Alexandrov – President of the NGO the “Polar Convoy” – said that the aim was ‘to discuss the possibility of creating a supranational formation of veterans’ organisations and Museum ships … to maintain in the public memory …. the Arctic convoys …. (after) the departure of the last of the veterans.’ Not surprisingly there were presentations which recalled aspects of the history of the convoys. The best of these were the personal stories related by 3 of the sons of veterans. Unfortunately translation time had not been factored into the programme and so, as the day progressed, some of these had to be shortened. One or two other presentations struck me as being inappropriate for the theme. The UK presenters seemed to be the main initiators of ideas for the future: promoting HMS BELFAST and Loch Ewe as central in the UK to Arctic Convoy remembrance by attracting the next generation of supporters; siting copies of the magnificent St Petersburg monument “in memory of all sailors who served in the Arctic Convoys” in Edinburgh and on the Thames Embankment adjacent to HMS BELFAST; creating a Twinning arrangement between HMS BELFAST and the Icebreaker KRASSIN – 2 Museum ships which are ‘Last Witnesses’ to the convoys.

The final session took place the following day in the City Museum in Kronstadt. The End of Conference Memorandum subsequently received includes pledges:

1. to establish an all-embracing international association – the “Immortal Polar Convoy” - at the next conference (Iceland in 2018);

2. to attract as wide a swathe of new members as possible to join this association, particularly from younger generations;

3. to expand the scope of activities to include Twinning links, exchanges of young people, organising joint exhibitions and publishing ventures etc.;

4. to replicate the St Petersburg Convoy Monument at other significant sites.

On our first day we appropriately started with a wreathlaying ceremony at the Convoy Monument. Impressively located in front of the Maritime Technical College and first unveiled in 2014 this is rapidly becoming the focal point for Convoy remembrance in the city. Emily helped me lay our wreath. Later inside the College we attended a ‘Lessons in Courage’ session. Interlaced with some energetic song and dance from the Cadets. Seymour Taylor gave a moving testimonial to the friendship he had always received from our hosts while Alison and Hannah Bell used “Keep calm …. and Convoy on” to describe the role their Convoy veteran father/grandfather Baden had played in their lives. After a quick Lunch we bussed across the city to the Icebreaker KRASSIN where we were welcomed by the new Director, Irina Stont. While the majority were taken on a tour of the ship (built on the Tyne in 1917) 5 of us engaged in a lively debate with Irina about Twinning her ship with BELFAST for which she showed great enthusiasm.

Our hotel was located very close to the British Consulate and so it was a short walk across to the Reception they hosted for us in the evening. This was a warm and friendly affair with some familiar faces from previous visits attending. I’m particularly appreciative of the help we received both before and during the visit from the Deputy Consul-General (Elizabeth Webb) and members of the Embassy Defence Staff (Captain Chis Connolly RN, Victor Konusov and Major Struan Cunningham). Their constant presence with us was always reassuring.

After the disciplined conferencing on day 2 we were treated to a performance of “Swan Lake” which we all enjoyed. Yurij made a presentation to the theatre Director before the performance started after which we all rose to our feet to be applauded by the audience – mostly visiting tourists from the Orient by the look of it!

We were at Kronstadt for most of the third day. After concluding the Conference we walked across to the magnificent Naval Cathedral for Lunch in the Crypt followed by a Talk then a short Memorial Service in the main Cathedral space. Censers swung and prayers were sung and most of us lit candles in the Russian Orthodox tradition. In the evening we were hosted at a Gala Party in our honour in our hotel. It was punctuated by a seemingly unending sequence of toasts but I don’t think that anyone was neglected and the warmth of our comradeship was tangible. We were on our way to the Airport at 0200 the following morning…..

Finally I pay tribute to all the hard work put into the arrangements for this Conference visit by Captain Yurij Alexandrov and his 2 Vice Presidents: Captains Sergey Aprelev and Igor Kozyr. Many others contributed but I would particularly like to single out the young students who did much of the translating for us.

This trip did much to keep what I like to describe as the “bubble of friendship” between all national Arctic Convoy aficionados airborne. We addressed the demands of keeping the memories alive and produced some constructive ideas for ensuring that this will happen.